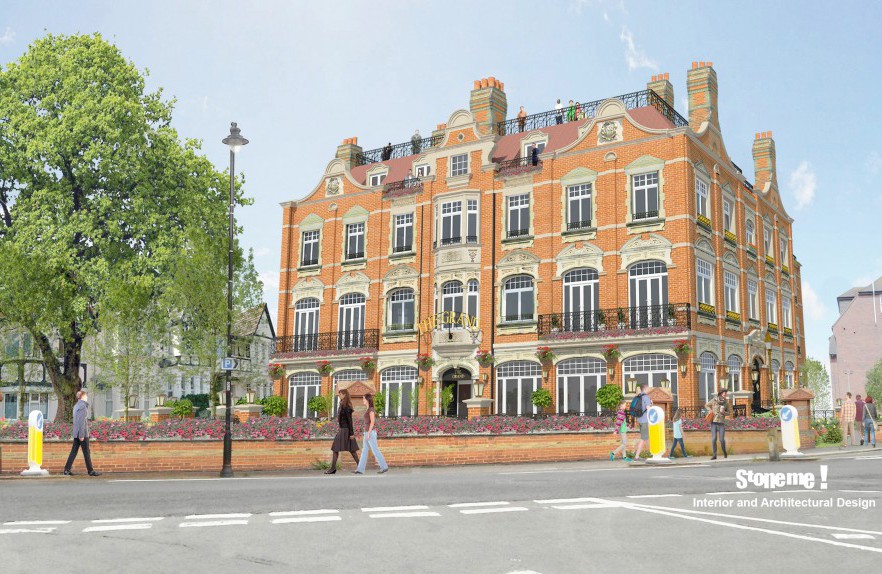 Is it you? Have you got a spare £7,000,000 or £8,000,000 in your back pocket, that’s just for the building work, you have to buy the property itself first. That can be the only excuse for the mystery man that has applied for full Grade II listed status for The Grand. If you are prepared to put your own money up, develop the property to the same or better standard than Mr Norcross is prepared to do and you have genuine passion for the property and want to see it restored to its former glory then fine.

If however, you are a bit of a NIMBY and don’t want anything to happen to The Grand or are bitter at the thought of someone doing OK out of this building then I am sorry you should stand aside and let Mr Norcross get on with it.

Anybody who was originally interested in purchasing the property had ample to chance to buy it when it was on the market originally and with the protracted planning process that Mr Norcross has had to go through there has been 3 or 4 years to have brought this up if you thought it was valid.

The timing of this application just after planning had finally been approved does strike me as being a little odd. It does look like somebody standing on the sidelines just trying to throw a spanner in the works. If however you are that person who has so far wished to remain anonymous I am sure there are a great deal of people locally who would like to hear from you. If you reasons are valid and just then the passion that is felt for The Grand will listen and take it on board and possibly even agree?

I cant see it myself it just looks like another delay tactic from people that just seem to want the property to deteriorate beyond repair. I have made my feelings pretty clear over the years to Mr Norcorss’ plans and to date I haven’t met a single person that doesn’t want him to just be allowed to get on with it and do it.

We are entering a crucial time with The Grand in my opinion. I honestly think that if the development is not well under way by the end of the year that the building will become beyond repair and we will lose it forever. It has probably been a couple of years since I was allowed to visit myself and even then you could tell that somebody with very deep pockets was needed to breath new life in to it.

Even at that time the property wasn’t water tight and you could tell the structural damage that was going to need a great deal of attention. Imagine what a couple of years of neglect and the great British weather have done to it not to mention the current cold snap we are going through. I don’t believe that the property will make it through another winter.

I can understand the emotion and passion for The Grand. I to used to frequent the delightful bars on the ground floor with the sticky carpets and went to a number of very loud gigs upstairs. I cant say that I had pleasure in staying in the hotel rooms though although they looked lovely (not)! I think that we all have to come to realise that a hotel of that size is just not viable. Could any company guarantee filling 20 or 30 rooms on a Tuesday night in February? It is just not possible.

It is inevitable that it was always going to end up as residential apartments. This will ensure that the property is always occupied and more importantly with the new residents maintenance and service charges that the building will continue to be maintained to a high standard.

With the commercial units on the ground floor and basement. I think it was important to keep that element in the plans. Like I said we all used to go out drinking there in our youth, how nice now that we are advancing in years for us all to be able to go back there for a meal or drink again. And with a building like that I expect it to be THE place to go for that special event. How nice to have an upmarket restaurant and bar to frequent locally instead of having to travel miles or get the train in to London. I am sure that the addition of a new Spa will prove extremely popular as well, Simone from our office is already working out what treatments she can have!

In summary, the plans might not be every bodies cup of tea but I think that we can all agree that we need to start seeing action with The Grand. I am not saying that we should roll out the red carpet for the skip lorries as soon as Mr Norcross starts. We should keep a close eye on proceedings and make our feelings clear if we do not agree with the things he is proposing but we must now at least start to see some action and improvements to the building and hopefully an end date for completion.

It feels like I have said this every week for the past 3 years but maybe, just maybe, will be able to have a gin & tonic on the sun terrace in 2019?

On a completely different note I am pleased to say that this week Lisa has returned to work after her terrible car accident a few weeks ago. She is making good progress with her recovery and I know that she would like to thank everybody for their kind wishes and support. I would like to also thank people for their support for calls to try and curb the cars that are speeding through our town. I know that there are now a number of different groups applying pressure to the council, calling for more speed cameras or speed bumps. Anything that might help!

I spoke to one gentleman who asked the council for details of a speed survey that they had previously carried out on Hadleigh Road in Leigh. For some reason the council wouldn’t give him the full details but he pursued it and the only information he was given was the top speed recorded. Bearing in mind that Hadleigh Road has a speed limit of 30 miles an hour. How fast do you reckon the top speed was? 35 mph? 40 mph? Even 50 mph? Unfortunately not, the top speed recorded in this traffic survey which was done a couple of years ago in Hadleigh Road where Lisa had her accident was, wait for it 75 MILES AN HOUR!!!! That is justridiculous and scares the hell out of me, what sort of idiot have you got to be to drive at that speed in a built up area like that?