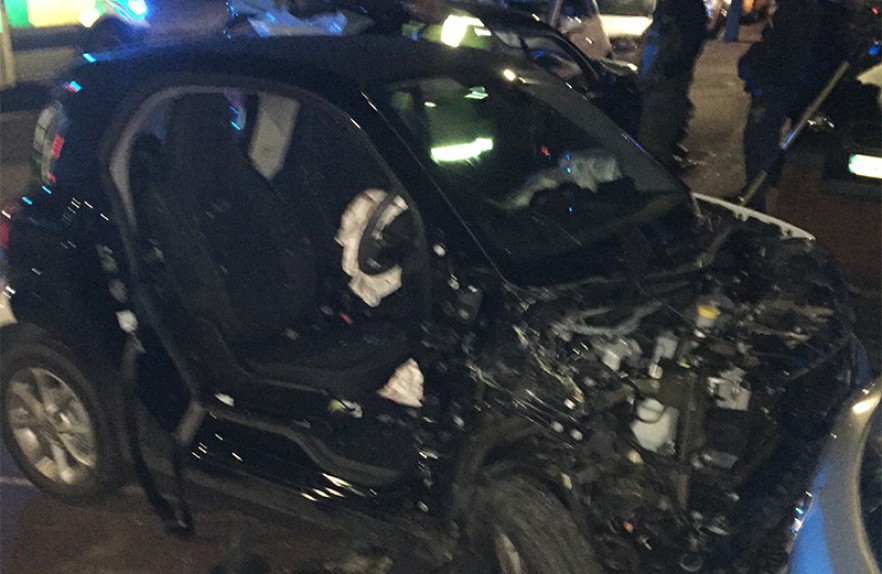 For those of you that aren’t aware our lovely, bubbly, confident and ever so ditzy Lisa has been knocked for six. Unfortunately, she was involved in a very nasty car accident in Leigh and has been off work for over a week. Once again though it has brought up the issue of the speed that some people chose to drive around our roads.

Thankfully there is no long lasting damage for Lisa but she was extremely lucky. Driving in one of our little Smart cars she was hit head on by a large BMW that was obviously travelling much too fast, judging by the 40 foot skid marks that it left in the road. Both cars were completely written off and Lisa ended up crashing in to a parked car that was also very badly damaged. Bizarrely and hugely coincidentally the parked car that was quietly parked on the drive minding its own business was mine and my wife’s! I wasn’t working that day and was quite happily watching telly, just about to go out and collect my wife and daughter from her dance class. I heard a massive crash and our car alarm going off and immediately ran out to see what was going own. Imagine my surprise when I saw Lisa surrounded by a scene of carnage. I was a bit of a mess and certainly useless as I was in a bit of shock I think but loads of my neighbours came out to see what had happened and rang the emergency services.

First on the scene was a ambulance car and then a proper ambulance and the police turned up and immediately closed the road. Lisa was obviously hurt and very shaken so the decision was made that she was going to have to be cut out of the car and the fire brigade were called and eventually she was taken off to hospital. I am extremely happy and relieved to be able to say that she was discharged that evening and there is hopefully no long lasting damage. She is extremely bruised and battered and obviously very shaken. Everyone here at Scott & Stapleton would like to thank all of the emergency services and passers by that helped out at the time and for all of the good will messages that have come in for Lisa since the accident.

It does however bring home just how fast some people still chose to drive along our street and why some roads like Thames Drive or Tattersal Gardens can have speed bumps whereas others like Hadleigh Road, Marine Parade or The Broadway itself don’t get any traffic measures to slow these people down?

I have written before about people speeding in our town but nothing seems to be done. We have had a number of very serious accidents over the years and nothing changes so I am not sure what to do. You read about residents in other parts of the country standing on their driveways with hairdryers pretending to be speed guns or making mock speed cameras to try and slow people down. You always think of these people as a bit nutty but when it strikes home as it has done this week you can understand the extreme lengths and desperate measure that people go to.

This week there was a traffic survey that took place on Marine Parade I noticed. I don’t know if this was as a result of Lisa’s accident or just coincidental. The volunteers were all there on the side of the road taking notes but they were all dressed if fluorescent coats so could be seen from 100’s of yards away and the drivers, probably thinking that they were police, slowed right down as they went pass worried about getting a ticket.

They need to be a bit more sneaky and to have these surveys at night time or at various times of day. I don’t think we are ever going to cut it out completely and I think that 99% of people comply with speed limits and take it easy but when you see a boy racer doing 50 miles an hour through the Broadway it sends a chill down my spine thinking of a child or anyone stepping out between 2 parked cars and getting mowed down.

This has been a big shock for all of us at Scott & Stapleton and has certainly put things in perspective we now hope people take a look at themselves and their driving habits. Most people know if they just drive too fast or are always late and in a rush for something but surely being 5 minutes late for a meeting is better than ending up in hospital?